4 most atmospheric historic places to visit in Scotland

Why do tourists from around the world flock to Scotland?  As well our outstanding Food and Drink offering, the stunning scenery, the friendly Scottish people and of course, the weather….the majority of tourists come to Scotland to embrace and soak up our rich cultural history.  The success of TV shows such as Outlander have furthered the popularity of Scotland and whilst places such as the National Trust for Scotland’s Culloden Battlefield visitor centre should be on every visitor’s itinerary, there are several lesser known places that are a must for history lovers who want to travel back in time and get a sense of where this beautiful country came from and the people who have made her.

If you want to get away from the crowds and follow your own Scottish historical trail, read on….

Next on the list is Castle Campbell which sits proudly above the village of Dollar just north of Stirling. Much less well known than the nearby historic attractions of Stirling Castle and The Wallace Monument, Castle Campbell offers an insight into medieval living in the heart of Scotland.  With its accessible dungeons juxtaposed against the attractive terraced gardens with spectacular views down Dollar Glen, this place oozes with atmosphere.  Originally known as Castle Gloom, Castle Campbell nestles between the Burn of Sorrow and the Burn of Care before joining together to form overflowing  waterfalls and sprouting rock pools that flow down the Glen and through Dollar.  The origin of the name Dollar is said to come from the Celtic word ‘dolour’meaning sadness and legend has it that a broken hearted princess died in the castle.  Castle Campbell may not have the grandeur of Edinburgh Castle or Stirling Castle but you cannot help but embrace the mood of the personal histories of its inhabitants.

For more personal history, I’ve always loved Ardvreck Castle which lies far north just east of the pretty fishing village of Lochinver. Proudly overlooking the stunning Loch Assynt, Ardvreck is a ruined castle dating from the sixteenth century and constructed by Clan Macleod. If ever you wanted to build a castle with a stunning view, it would be here….location; location; location…must have existed way back then. Testimony to this is the fact that it wasn’t terribly easy to defend and in 1672 Clan MacKenzie captured the castle and took control of the surrounding lands of Assynt.  Not content with the view, legend has it that the second Mackenzie of Assynt, Kenneth, was persuaded by his wife to abandon the cold and uncomfortable castle and build a more modern manor house next to it.  Tragedy struck though, as the Mackenzie’s built up a number of debts and forced with eviction, decided to torch Calda House to the ground rather than let it be taken over by the increasingly powerful Sutherlands.  For the most beautiful of settings with a bit of romantic history thrown in, this place humanises the lives of our ancestors and is a great stopping place if you’re doing a campervan road trip around the NC500. 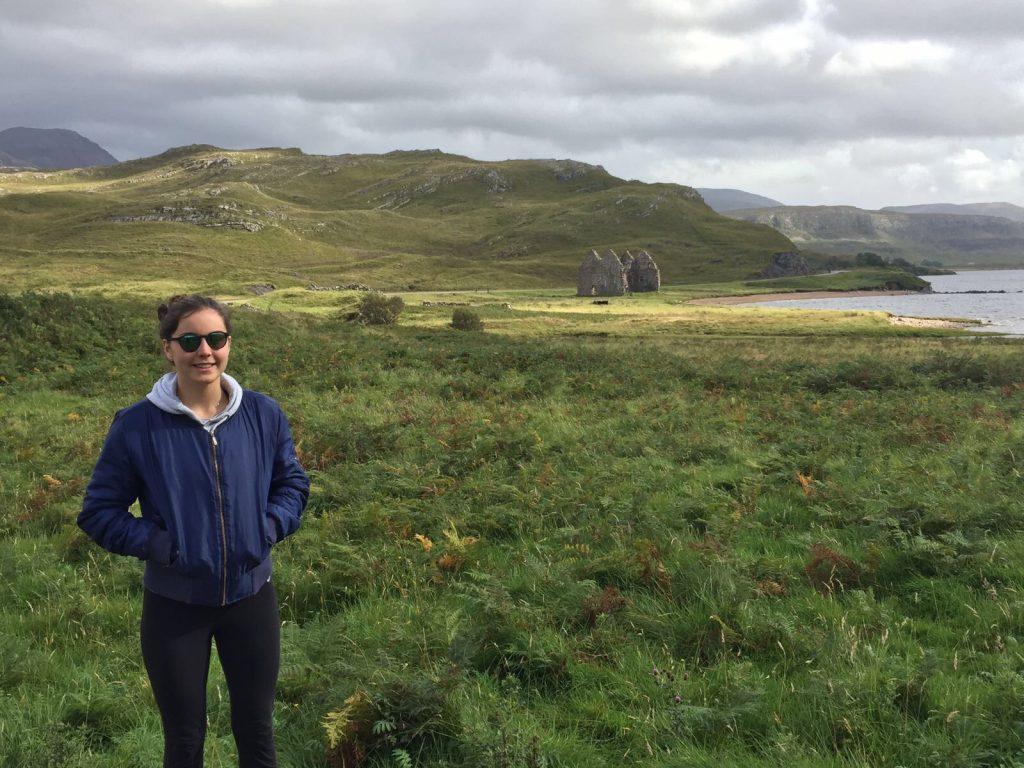 If you want to get away from historical heartbreak and drama, head to the tiny island of Oronsay in the Inner Hebrides. Lying south of the better known island of Colonsay, the island is owned by an American lady who has an agreement with the RSPB wo are responsible for running the wildlife management of the island.  Accessible at low tide from Colonsay, you walk across the sands and past the grazing highland cattle along the quietest and most serene of roads lined with wild flowers and nesting birds with views out to the Atlantic Ocean.  The tranquillity of the walk to Oransay Priory (the population of Oronsay is currently 5 people) is a good preparation for the stillness of the Priory.  Founded by Augustinians in the early 14th Century, the Priory became an important religious centre.  With far less visitors than neighbouring Iona Abbey, Oransay Priory offers silence and solitude as you wander around the cloister and view the Celtic engraved crosses and gives a real insight into earlier times when monks lived and prayed here.

And finally, no list of the best historical places for atmosphere would be complete without including the Iron Age Brochs near Glenelg. We have so many campervan customers who travel to the Outer Hebrides in search of Celtic history where there are an abundance of historical sites.  However, if you don’t have the time to journey so far, take a visit to the lesser known Brochs of Dun Telve and Dun Troddan just south of the tiny village of Glenelg and looking across to Skye.  Only 16 miles from the infamous Eilean Donan Castle (possibly the most photographed of all Scottish Castles) at Dornie, the Brochs are the most complete structures of their kind and date back over 2000 years.  Standing within the thick, windowless towers,  you get a real understanding of how frightening life must have been for its inhabitants with the threat of invaders from the seas and wild animals from the surrounding landscape.  This place isn’t spiritual; it isn’t romantic and it’s not a place of grandeur.  What it offers is awareness of the daily hardships that the Picts who occupied these defensive towers endured, as well as the sense of community that they built to survive.

Make sure you take time to visit these lesser known places of Scottish history on your road trip around Scotland and you wont be disappointed.  We Scots have been blessed with living in this beautiful country but it hasn’t come without it’s hardships.  These 5 historic places take you back to what life was once like and offer atmosphere in abundance!