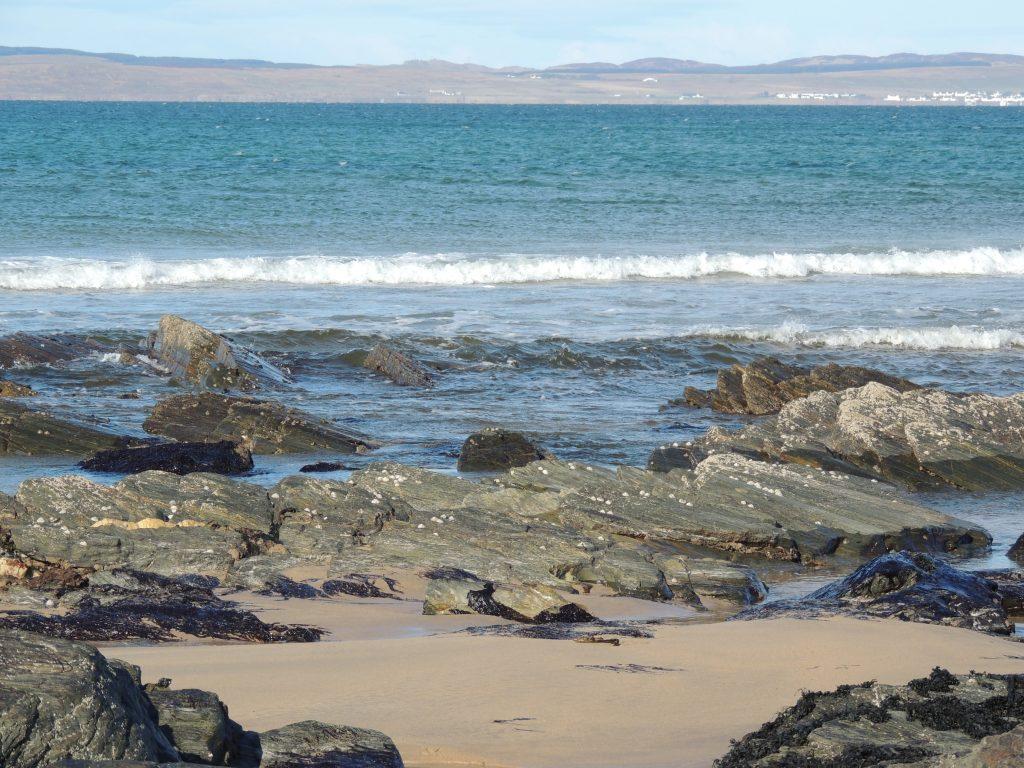 Beautiful beaches on Islay in the Inner Hebrides of Scotland

Birds have long been known to help predict weather patterns and so we shouldn’t have been surprised that our first flavour of Islay as we drove off the ferry this week was to pass field upon field of both Barnacle and Greenland Geese sheltering from the artic weather about to hit mainland Britain.  Home to over 45,000 avian winter visitors, Islay is the most southerly island in the Inner Hebrides and enjoys its own micro climate with more than 30% more sunshine compared to the Highlands of Scotland. The difference in temperature is particularly stark in the spring months and this, along with its reputation for whisky, seafood, wildlife and a rich archaeological heritage dating back to the Neolithic Age, make Islay the perfect destination for a Spring break in Scotland. 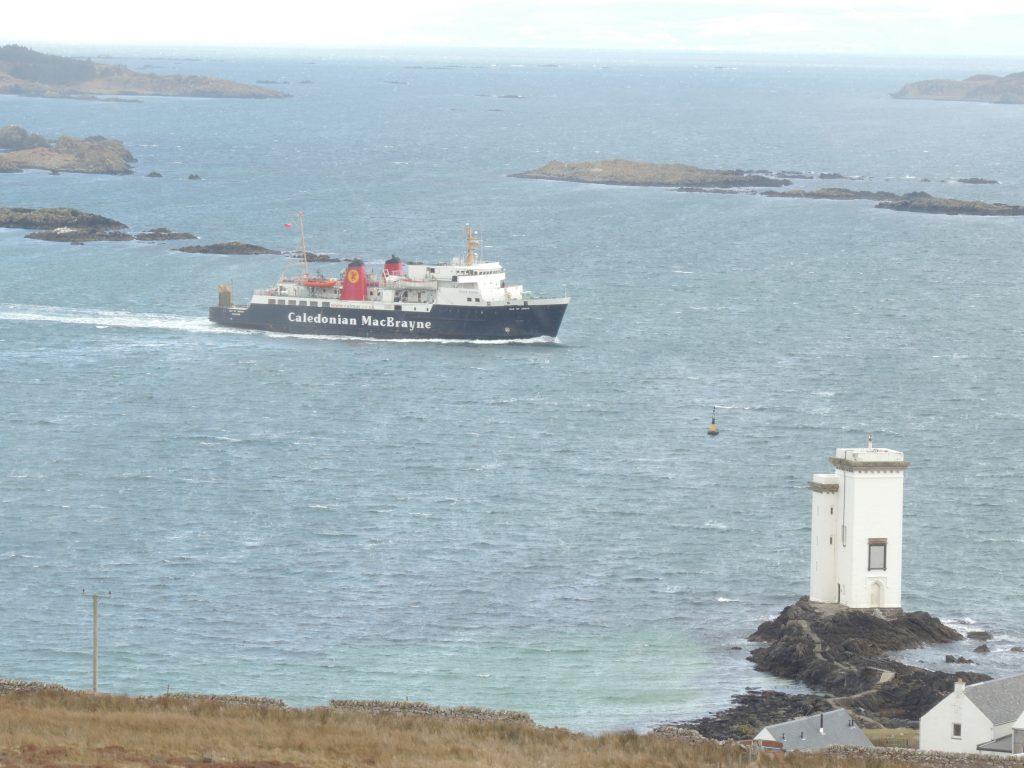 A short 2 hour ferry journey from Kennacraig on the west coast of the Mull of Kintyre, there are two ferry ports on the island located in the north at Port Askaig and in the south at Port Ellen.  Ferries from Oban are available in the summer months. As we drove our VW campervan off the ferry and headed south to the pretty fishing port of Port Charlotte, we were delighted to discover how wild the island felt despite its growing popularity.  Along with over 200 species of birds visiting the island each year, the varied terrain in Islay gives life to a cornucopia of wildlife ranging from roe deer, red deer and wild goats in the wide open interior; to seals, otters, whales and dolphins along its coastal waters. 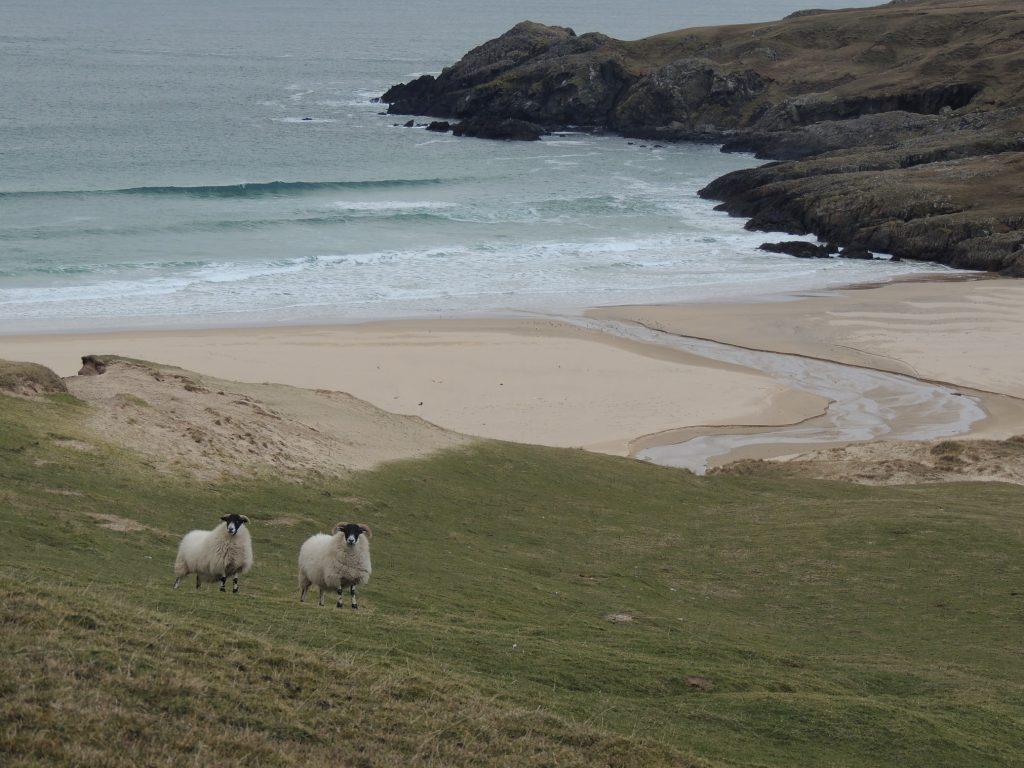 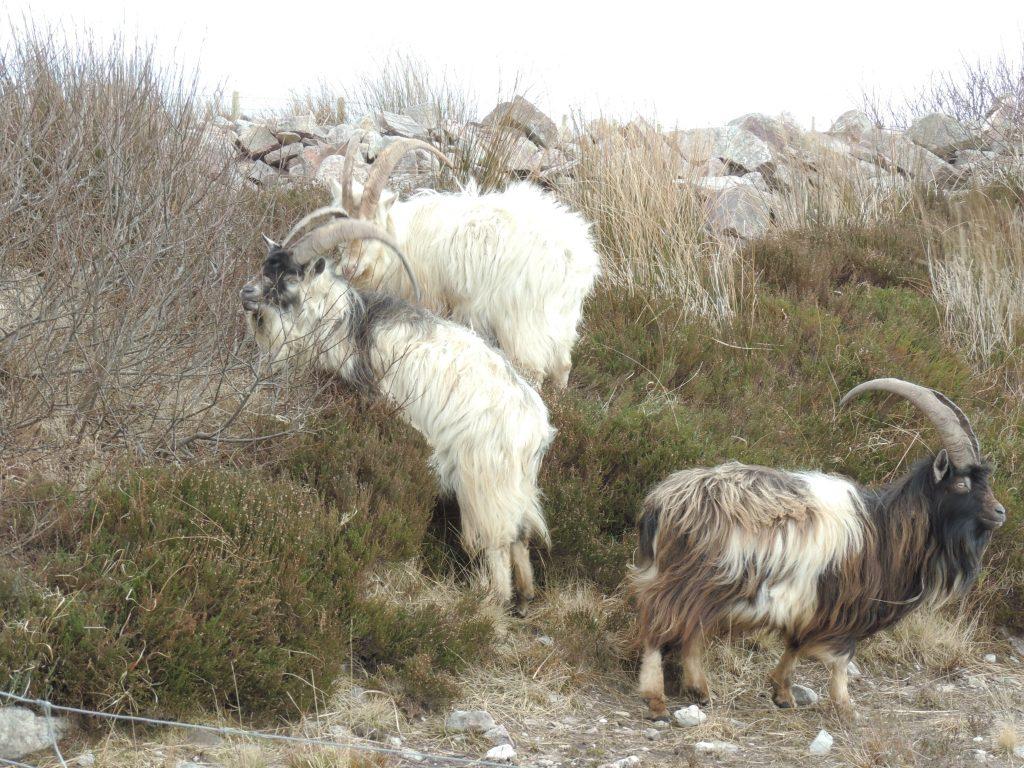 Wild goats at The OA on Islay

Look up at the sky and you are likely to see sparrowhawks, hen harriers and golden eagles gliding over the peaty landscape that serves the island’s whisky industry so well.  For those hoping to see more, the RSPB nature reserve on the north east coast of Islay at Loch Gruinart is one of the top wildlife sites in Scotland and has a wide range of habitats along with a dedicated in-house farming operation. 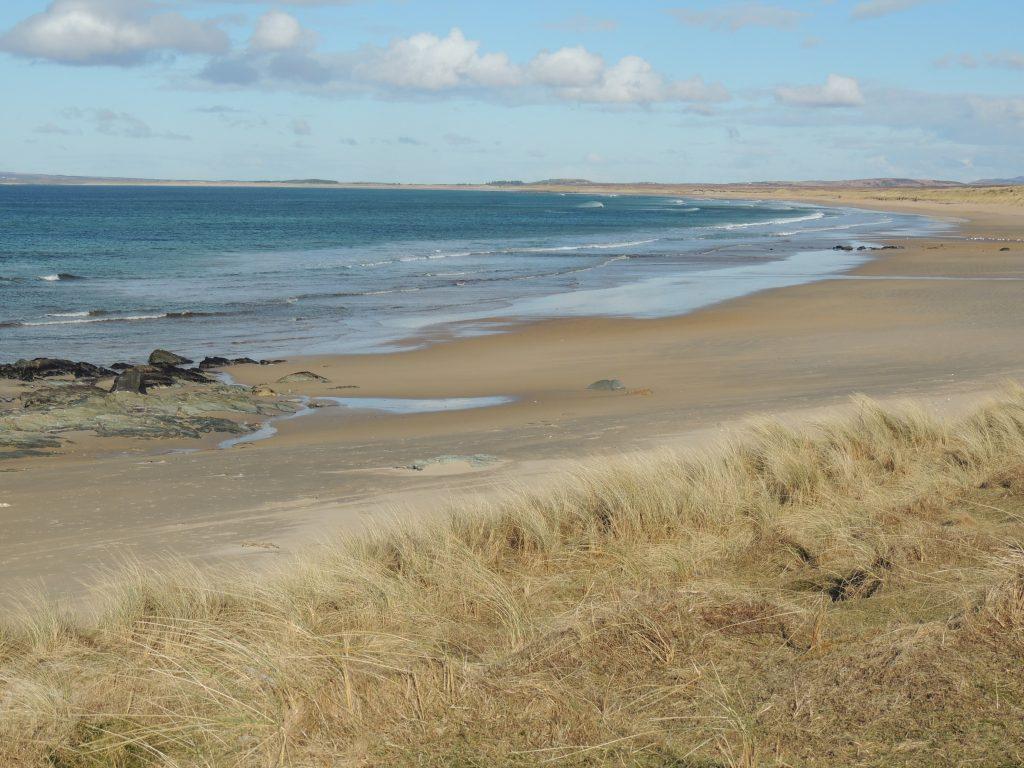 As well as wildlife, Islay is also renowned for its 135 mile coastline with golden sand and shingle beaches which can be reached either by foot along cliff topped paths or by car along the coastal road.  For campers, there are plenty of wild camping spots such as the long shingle beach at Lochindaal near Port Charlotte, as well as two campsites. Port Mor is sited near the quaint fishing village of Port Charlotte whilst Kintra Farm lies just north of Port Ellen on the most stunning white sandy beach.  There is also a newly opened community mobile site at Port Ellen at the old filling station on the shore front which offers campers electric hook up and waste facilities right in the town and is part of the island’s aim to promote responsible camping. 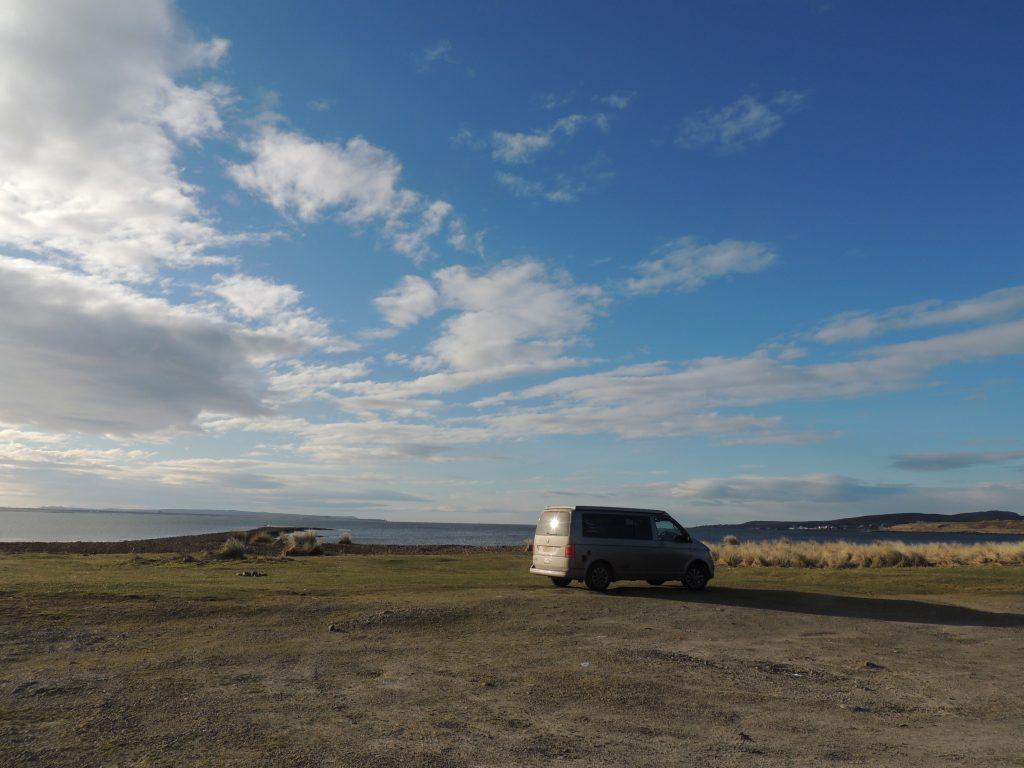 Wild camping at Lochindaal on Islay 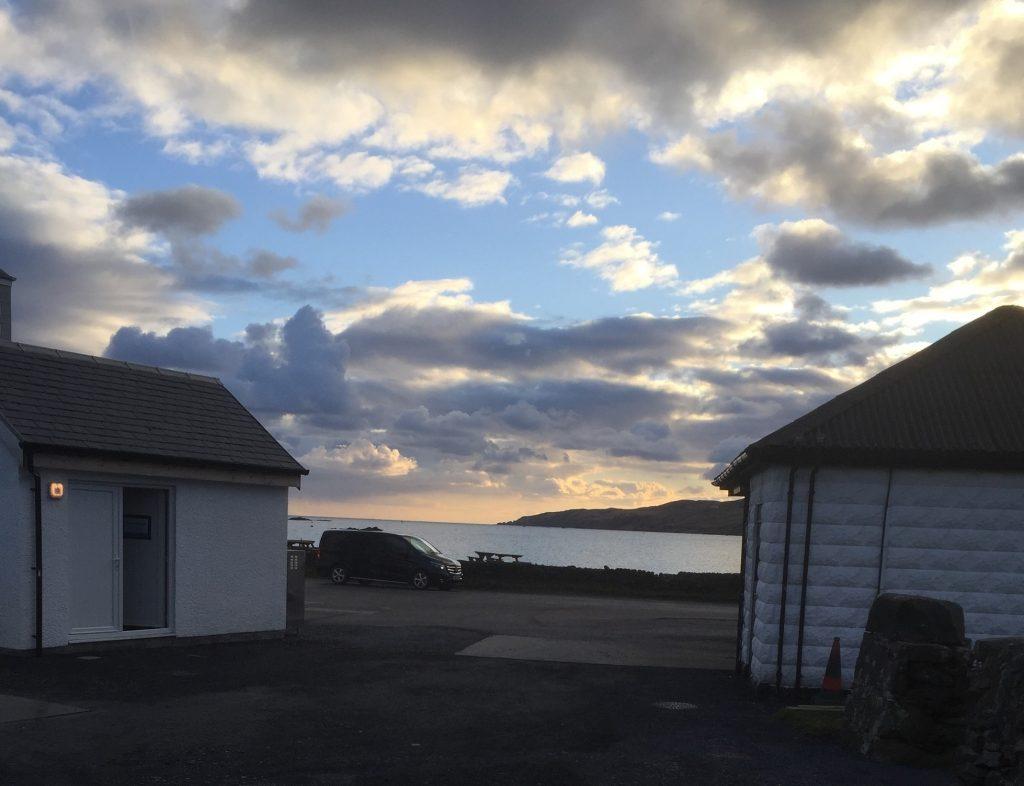 Care-takers of an island rich in its archaeological heritage, it is little wonder that the community are keen to protect their landscape and ensure responsible tourism.  At every twist and turn you’ll come upon another standing stone, abandoned small holding or crannog.  Besides the standing stones at Port Ellen and Ballinaby, and the stone circle at Cultoon just north of Portnahaven; the site of Finlaggan near Port Askaig is well worth a visit.  Sited on what was the ancient seat of the Lord of the Isles in the late medieval kingdom of Dal Riata, the archaeological dig holds two main ruins including a chapel and its service building which are surrounded by carved gravestones including the grave of Robert the Bruce’s grand-daughter.  More recent island history is remembered at the American Monument which is built in the shape of a lighthouse and sits on the south westerly peninsula of Islay, known as the OA, and commemorates the loss of 500 troops from American warships, the Tuscania and Otranto in WW1, in 1918. 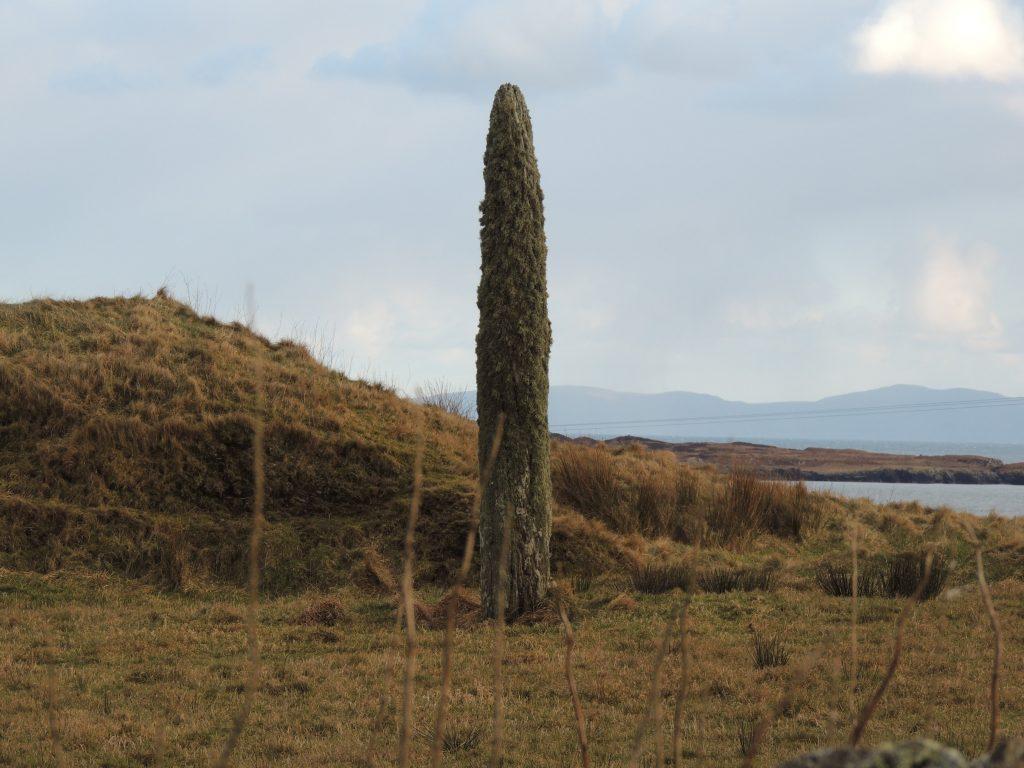 Continue along the southern coast of Islay and you come to our favourite part of the island near Port Ellen and the newly opened cycle path that runs between Port Ellen and three of Islay’s most famous whisky distilleries, Ardbeg, Lagavulin and Laphroaig. The flat path running along-side the coastal road is an easy option for those who want to enjoy a few drams! We started our tour along at Ardbeg where we devoured the most delicious seafood dish of Halibut, Cod, and Islay lobster in The Old Kiln Café, which was  once a peat kiln and is open  weekdays throughout the year. 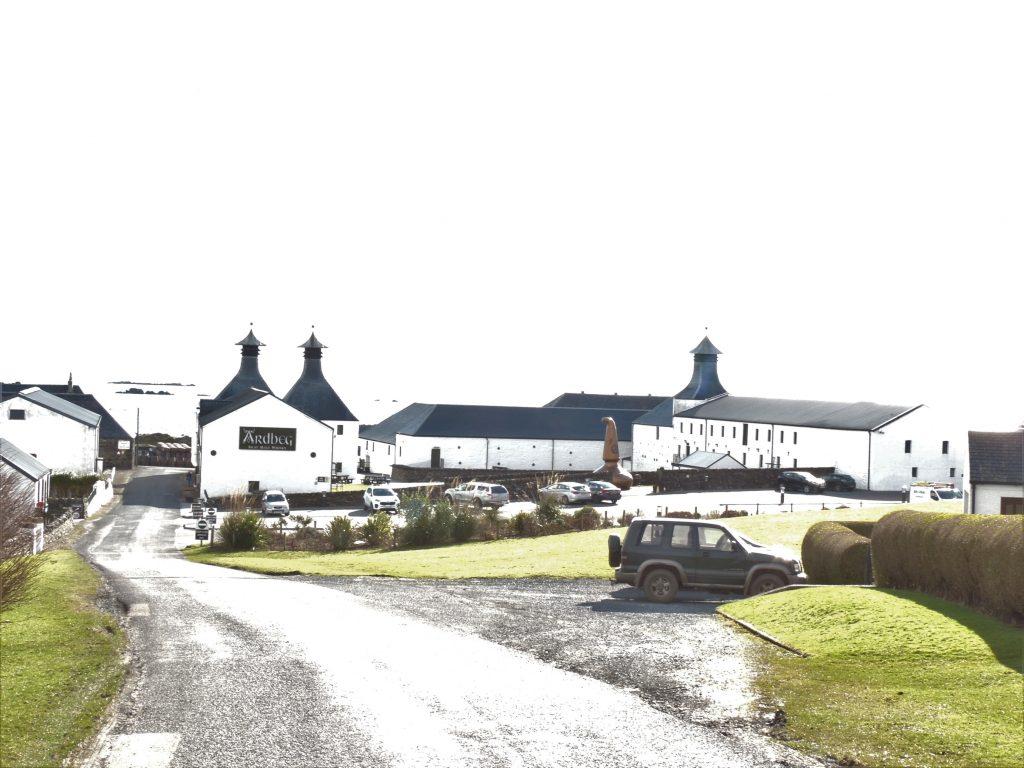 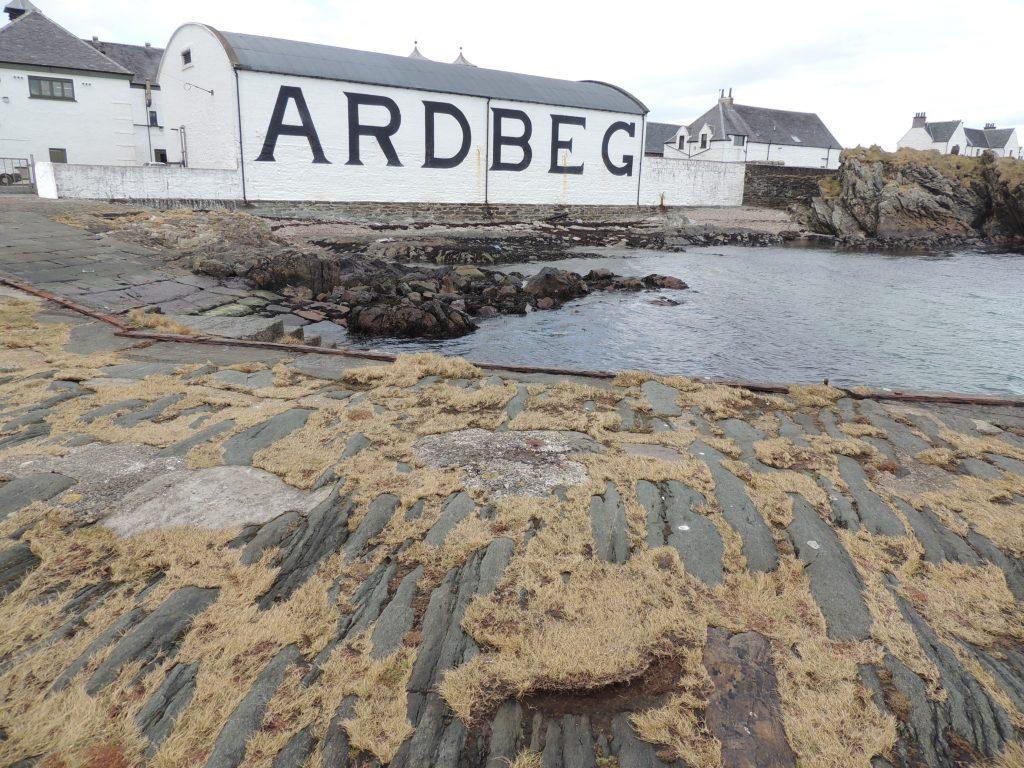 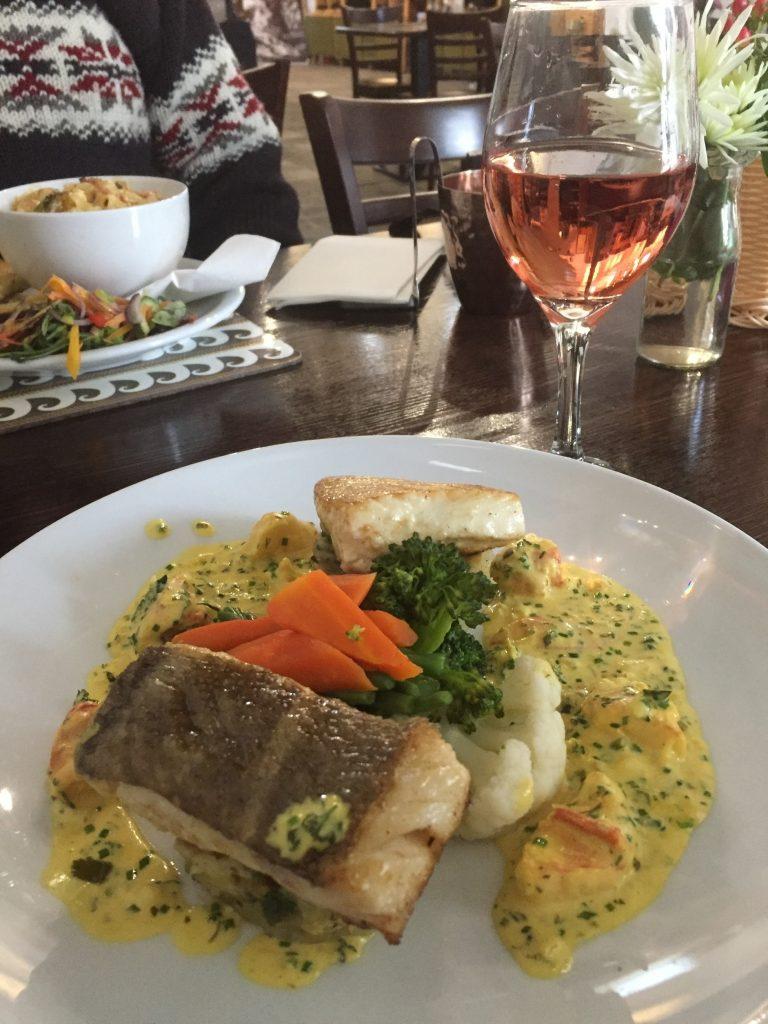 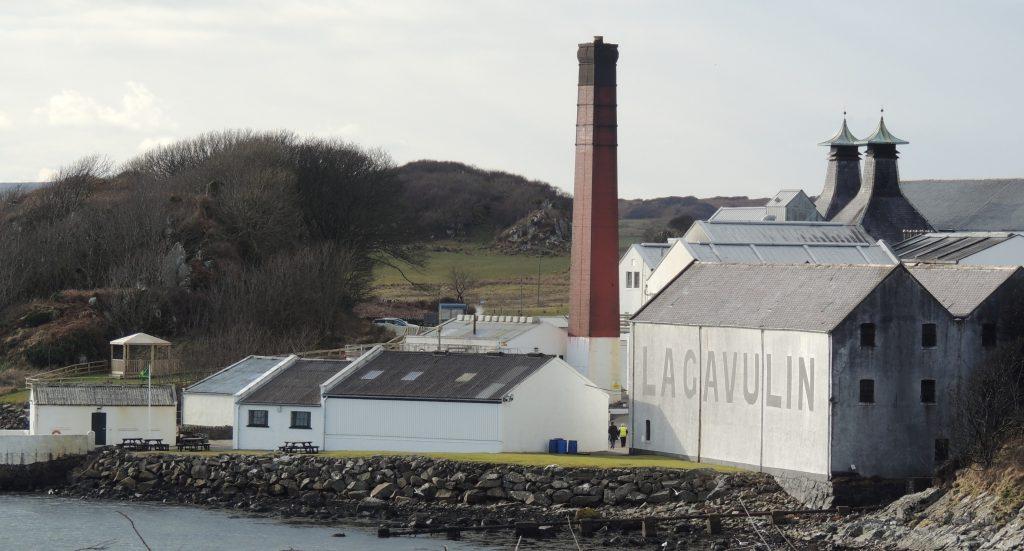 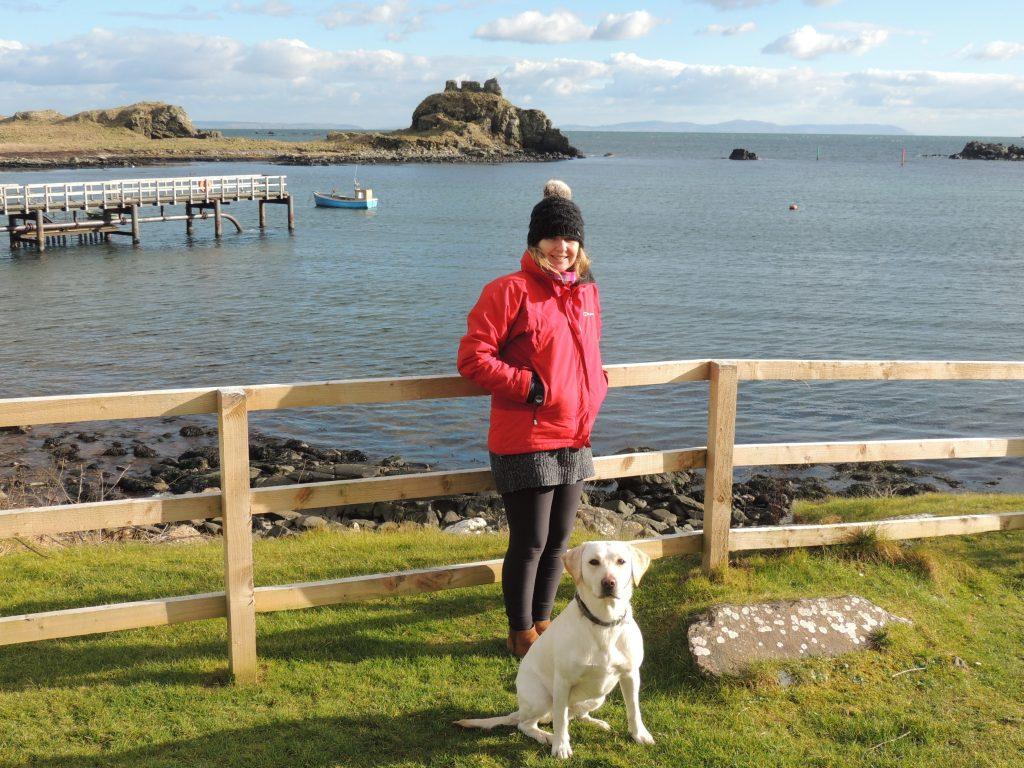 We then drove the short distance to Laphroaig where Ivan cashed in his ‘rent’ and enjoyed a dram as a ‘Friend’ of Laphroaig.  The scheme gives all friends a numbered plot (a square foot) of Laphroaig’s land that can be viewed on a visit to the distillery and the land rent of a dram, claimed.  For the driver, Laphroaig’s museum, which is free to visit, provides an illuminating insight into the distillery’s history with tales of previous owners including the original owner who sadly saw his demise when he fell into a vat of ale.  My favourite story was of the distilleries fourth owner, Bessie Williamson who took a 3 month summer job as a secretary and never left.  Noted for being the first woman to manage a Scotch whisky distillery, Bessie worked directly under the owner Ian Hunter, becoming distillery manager by WW2 and inheriting the controlling interest of the company in 1954.  For history lovers like me, the continuity of the buildings and the products provide a fascinating insight into the lives of our forbearers and the world in which they lived and whether you have a taste for whisky or not, I’d highly recommend taking a distillery tour.

Laphroaig whisky at The Islay Hotel

There are currently eight active distilleries on Islay and four more in the planning making whisky tourism key to the islands economy and the annual “Festival of Malt and Music” known as Fèis Ìle  which is held in the last week of May, presents events and tastings celebrating the cultural heritage of the island.  As we toured around the island, we were waved to and smiled at so often that I began to wonder whether we had been mistaken for locals but I think it is the islands cultural heritage that makes it such a friendly one.  The friendliness continued in the  numerous hotels and restaurants dotted around the island which provide an abundance of fresh local produce available from land and sea with daily landings of exquisite Islay lobster, crabs and scallops.   The highlights of our gastronomic trip were the Seared Venison at The Islay Hotel at Port Ellen and the Seafood Chowder at The Port Charlotte Hotel – both memorable dishes.   Equally memorable was the extensive selection of whiskies available at all the establishments we visited, with barmen and distillery staff delighted to share their vast knowledge.  We ate and drank like royalty on our trip and it is little wonder that the island is known as “The Queen of the Hebrides.” 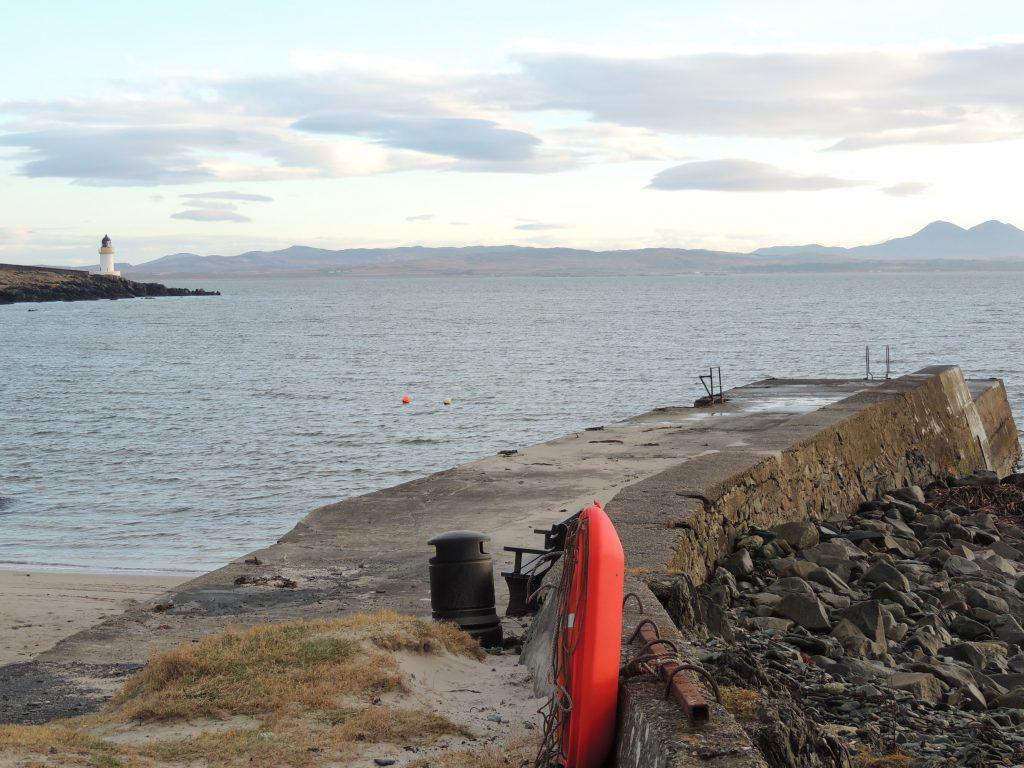 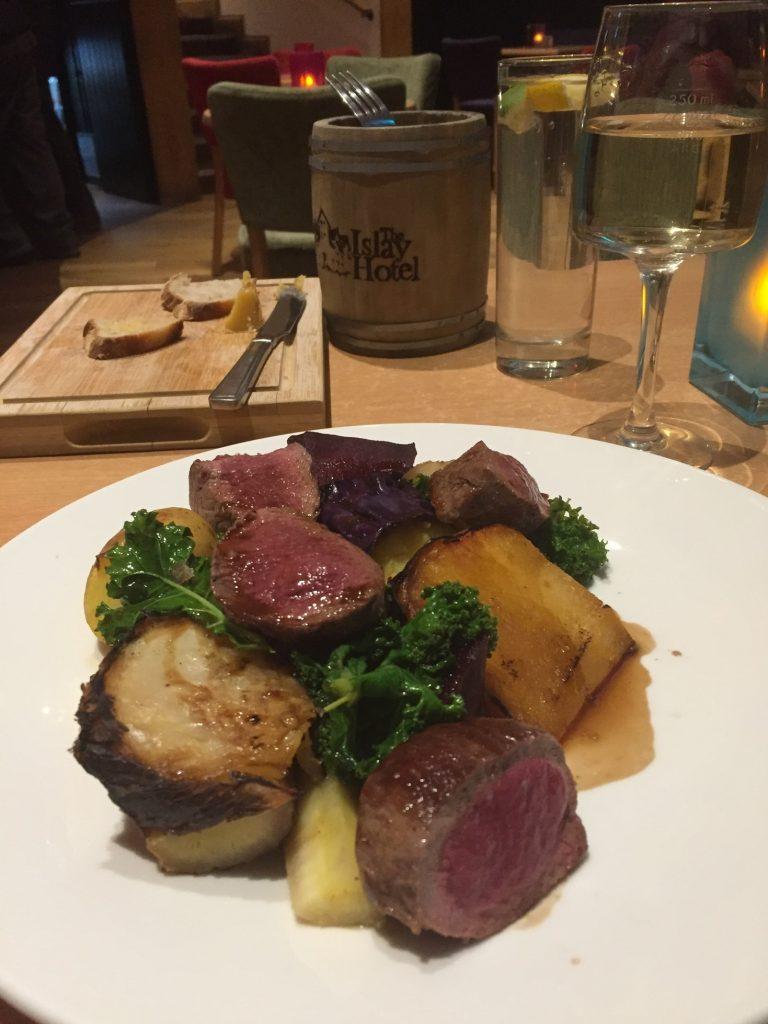