Recognised as one of the world’s last easily accessible wildernesses, touring around Scotland has become increasingly popular with both families and independent travellers alike.  Famous for its whisky, spectacular scenery and romantic history, there are an abundance of tourist destinations to visit whilst touring around Scotland, yet more and more travellers are looking to escape the crowds and head for the hills, lochs, glens and beaches  for some respite from their busy lives.

If you are planning a tour around Scotland this year, be it in a campervan, motorhome or car, take a look at our favourite hill walks and step out of the world for a few hours into some breath-taking scenery.

For unforgettable views that will be forever imprinted in your memory, top of the list has to be Stac Pollaidh north of Ullapool in the North West Highlands.   With a 500metre ascent, it’s not too big a walk (I first did it with my son Harry, then 3, perched for half of it on my shoulders).  It has a great path up with a wee bit of scrambling at the very top and truly stunning views westwards across to the summer isles and the lochans of Inverpolly.

Still in Sutherland, the next walk is much more sedate and starts at the white beaches of Achmelvic beside the campsite and meanders south over the craggy relatively flat terrain to Lochinver, a small fishing port.  The walk is approximately 5 miles and for those not too keen on working up a sweat, you can at least work up an appetite ready for the most delicious selection of pies to be found at Lochinver Larder.  You can either walk back by road or take a local taxi back to your starting point.

If you’re not planning on heading so far north, The Hidden (or Lost) Valley walk in Glencoe is a great wee climb to get the heart racing.  Surrounded by majestic munro mountains all around, the Hidden Valley is much more accessible but still offers an adrenal rush at the top of the climb as you look down one side to the A82 and the tour buses and an empty vast valley on the other side.  For history lovers, you can walk back in time and imagine being part of the MacDonald clan who hid their rustle cattle in the valley.

Ben Ann in the Loch Lomond and Trossachs National Park and near Aberfoyle is also easily accessible and provides a great day out for those with less time to tour around Scotland.  Very popular with day trippers from Glasgow, the path has recently been improved and although small with an ascent of only 340m, the pyramid shaped rocky mountain top reminiscent of some alpine peak, offers fantastic views down Loch Katrine and its famous steamboat below.

If you’re after a more remote hill and a bigger challenge, then the aptly name Ben Hope could fit the bill.  Located along the north coast of Scotland, not far off the North Coast 500 tour route, Ben Hope is Scotland’s most northerly mountain and as you reach the peak you will feel like you are literally on top of the world as you look out across the North Sea towards the Faroe Islands and beyond.  It’s a great hill to have ticked off your bucket list whether you be a munro bagger or not.

Talking of bucket lists, if there is one walk you should do whilst touring around the North West of Scotland, it has to be the 4 mile walk into Sandwood Bay, a spectacular 1-mile white sandy beach on the north west coast of Scotland, 5 miles south of Cape Wrath.  Slightly further west and south of Ben Hope, the walk starts near Oldshoremore and is perfectly flat.   Take a picnic and enjoy some pure escapism when you reach the beach and look out across the Atlantic Ocean past Am Buchaille, an ancient sea stack just off the coast.

A less spectacular coastal walk but much more accessible is the Fife Coastal Path. Reaching all the way around Fife, just north of Edinburgh, the path stretches 117 miles and is split into 8 sections. Starting at Kincardine on the Forth of Firth and ending at Newburgh on the Forth of Tay, the section between Elie and Cambo Sands at Kingsbarns, offer the prettiest stretch running past the pretty fishing villages of the East Neuk and the rocky beaches that look out to the uninhabited Isle of May renowned for its bird life (which include Puffins).

An equally beautiful coastal walk can be found along the Moray Firth running east from Inverness to the pretty village of Findhorn.  The Findhorn circular takes in the long sandy and shingle beach with New England style board walks across the dunes down to it,  and the pretty village of Findhorn.  The ample parking beside the beach is great for those touring Scotland in a campervan or motorhome who are looking for a camping spot close to the Inns and restaurants located in Findhorn.

Head further west and the man made Caledonian Canal that links the east and west coast of Scotland and incorporates Loch Ness,  Loch Oich, Loch Lochy down to Loch Linnie by Fort William.  A brilliant walk that is completely flat in places (the parts that run directly along the canal paths),it is also a fantastic cycle for those that have their bikes with them.  For those interested in the engineering of the canal, the locks at Fort Augustus and Corpach are a fine example of legendary Scottish engineer Thomas Telford’s work around Scotland.  And for the rest of us, they provide ample entertainment as you watch the yachts passing through the locks on their way to the yachting heaven that is the west coast of Scotland.

And finally, a walk that holds a special place in my heart purely for the ethereal atmosphere is the woodland walk at Comrie.  A short walk from the car park up a woodland gorge, the Deil’s Cauldron Waterfall and Wee Cauldron offer a mesmerising view as you watch the water cascade and plummet down each level of the glen into black boiling pools.   Located by the conservation village of Comrie, the woodland is located on the Highland Boundary Fault Line and experiences more earth tremors than anywhere else in Britain.  With ancient oak trees and red squirrels, if this walk doesn’t move you nothing will! 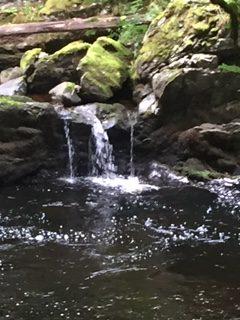